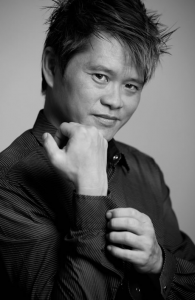 MAGUIRE has an ongoing career since 1991 in the entertainment performances has gain so much experiences in enchanting audiences with his dynamic and entertaining performances, games, humour, etc as a CROWD MOTIVATOR. Watch as MAGUIRE reduces your audience to tearful endless laughter! This extremely charismatic yet hilarious will have your guests fascinated from start to finish.

MAGUIRE is the ideal person for your event as he is effectively bilingual & versatile show-host as he is fun and witty in Dinner & Dances & Family Days; confident and presentable for Official Openings, Seminars & Conferences; convincing and savvy for Road-shows & Exhibitions; lovable and fun-loving for Children’s Events. In addition, MAGUIRE is the most sought after team-building & grooming trainer. He has brought many companies into closer cohesiveness and unity through his inter-communicative, motivational & sentimental games through Dinner & Dances, Family Day or Team-building Seminars. Hilarious and innovative in his stage games, MAGUIRE should be your only choice for a thoroughly successful & memorable event!

MAGUIRE also hosted the Chingay Parade 2003 and most National Day Dinners for the past few years. Comfortable with both formal and casual events, it is this versatility that has made MAGUIRE a very much sought after showhost in the entertainment industry in local & overseas.

For most, MAGUIRE is a familiar face as he join Mediacorp Channel 5 and has appeared in various dramas, docu-dramas and variety shows. MAGUIRE has also appeared in sitcoms and shows like Mr Kiasu, Phua Chu Kang, My In-Laws, We Are REM, The Incredible Tales, Crimewatch for more than a decade, Life Story – Madam Tan, True Files – Gun Siege, The Cop & the Gangster, Police & Thief, Behind Close Doors – Impotence, Red Thread, Serves You Right, highest rated Channel 5 drama – Point of Entry Seasons 1, 2 & 3, Payday, Unnatural – Accidental Fires, Whispers of the Dead, Mata Mata, Missing Peace, P.I 2017 Channel 8 《卫国先锋》, etc. and movies like I Not Stupid, Fairytales, Mandarin Drama Serials & Toggle Movie; Ang Baos & Kisses which has entered the Singapore Chinese Film Festival and variety shows like Top Fun and Jacky Jack Show are some of the variety shows that boost his entertainment and showbiz career. He is also the choreographer for Star Search Grand Final 2003.

MAGUIRE’s breakthrough is appearing in the Vansantham sitcom – Tamil.com for 2014 and and Solla Marantha Kathaigal in 2018. He had also appeared on National Day Parade 2014 as 1 of the MTV performers.

In addition, another breakthrough for him is that he was involved in international feature film by Eric Khoo – In The Room that has entered the International Film Festival and showing on the big screen on 25th February in Singapore Golden Village in 2016 and in many other countries like, France, Taiwan, Japan, Korea, Thailand, Hong Kong etc. Again in 2018 with Eric Khoo, Maguire is appearing for international channel, HBO for another film.

To him, whether on stage for live shows or in front of the camera for TV programs or movies,he just make everything happen for good.