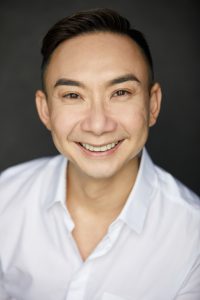 Hossan Leong, Chevalier de l’Ordre des Arts et des Lettres, is one of Singapore’s most loved and recognised entertainers. Affectionately known as ‘Singapore Boy’, Hossan is a consummate performer whose skills include singing, dancing, acting, piano playing, and stand- up comedy. He is actively involved in theatre, television, film and radio.

Hossan first rose to prominence following his appearances in major stage productions like Off Centre and Forbidden City: Portrait of an Empress. But it was his knack for comedy that won the hearts of the public, showcased through such notable engagements as hosting the television gameshow, We Are Singaporeans.

His fluency in French has also led him to international fame, as his work on such shows as A Singaporean in Paris and No Regrets: A Tribute to Edith Piaf have enabled him to play an instrumental role in bridging cultural relations between Singapore and France. In 2010, Hossan was conferred Chevalier de l’Ordre des Arts et des Lettres by the French Ministry of Culture and Communication for his contributions toward bridging the Arts between France and Singapore.

In 2003, Hossan made his directorial debut in Sydney, Australia, with Rodgers and Hammerstein’s Flower Drum Song. More recent directing credits include Forever Young, Stephen Sondheim’s Company, Beauty & the Beast and Snow White & the Seven Dwarfs. In 2018, he directed the True Colours Festival Concert at the Indoor Stadium.

Hossan continues to delight audiences, whether starring in his production Hossan-ah!, or through his creative involvement with local theatre productions, television and film. He intends to nurture the next generation of actors by giving them a platform to showcase their skills through his companies, Double Confirm Productions (Singapore) and Double Confirm Arts & Media Sdn Bhd (Malaysia).