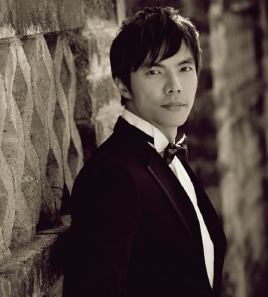 Having graduated with a Bachelor of Business in Business Administration from Royal Melbourne Institute of Technology, he had a successful working stint with Citibank Singapore for several years. His passion for the arts has been bright and unyielding even during his banker days, and eventually made the bold move of entering full-time into the arts foray.

His accolades include winning the title of Manhunt Singapore 1998, and the most sought after Best Physique title that year.

In 2001, he made it past more than 3000 applicants, into the finals of Singapore Mediacorp Star Search contest, featuring 12 budding actors and actresses. During the two months of intensive training in acting, hosting, singing and dancing, he has gained valuable experiences throughout the contest, and from one-on-one coaching from local stalwarts such as Xie Shaoguang and Xiangyun.

He has since risen up the ranks in Mediacorp Singapore’s grading system for actors, and continue to pursue a career in acting, and modelling. His pleasant demeanour and swashbuckingly-good physique endears him to his clients as their Personal Fitness Trainer.