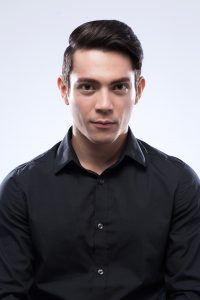 Born in Singapore, Aaron had his first acting experience at 15 years old as an extra on Okto’s ‘GX5’.

While pursuing his Diploma In Media Studies and Management at Nanyang Polytechnic, he continued acting in his free time with a supporting role in Okto’s ‘The Specials’ telemovie as well as the lead role in a short film, ‘Eve’s Apple’, that was submitted to the 48 Hour Film Project. In the latter, he won the award for Best Actor in the Singapore leg of the competition.

Aaron was also a host for an NYPtv segment, ‘The Movie Musketeers’, for 2 seasons and hosted a few episodes of the NYPtv magazine program, ‘NYP On Air’, during his time at the polytechnic.

After completing National Service, he continued to work as an actor while pursuing a Royal Melbourne Institute of Technology Bachelor of Communications degree at the Singapore Institute of Management. During this time, he gained more experience with roles in television shows, a telemovie, commercials and corporate videos.

Upon completing his studies, Aaron landed his first recurring role in Mediacorp Channel 5’s first long-form drama, ‘Tanglin’, and worked on numerous television shows like Mata Mata, Whispers of the Dead, Left Behind and Premonition.

In 2017, Aaron got his first role as a main cast member in Mediacorp Channel 5’s Faculty and continued having more prominent roles on shows like Silo, Code of Law 4 and Fam!.